ONBOARD Crystal Serenity – Read through to see special thoughts about our wonderful visit to Hobbiton!

It’s been awhile since I have updated everyone on our Crystal World Cruise adventure because the Internet connection has been down much of the trip in the South Pacific. This was partially due to the remote location and partially caused by the MTN onboard satellite. Crystal flew in someone from MTN who worked on it for almost two days before getting it up and running again.

So, here is a quick review of where we have been and what we have been doing. The last leg was mainly sea days, with bridge daily, which we love!  After two days in Lima, during which we stayed onboard (having been there previously), we spent five more days at sea before arriving at Easter Island, a promised highlight.

Alas, the seas were so rough they almost cancelled the stop. However, they decided to run the tenders to shore but with a stern warning that anyone with balance or walking problems should not go! Since my husband, Mike, had sprained his ankle severely one week prior to boarding the ship for the world cruise and since John, one of our traveling companions, had a new hip, we decided to cancel our private car and driver out of safety concerns.

We went up to Palm Court from which we could observe the tenders bobbing up and down like toy boats and ordered Bloody Marys. My friend Pinky said it well:  “The seas may be rough, but the drinks are smooth!”

A few of the statues could be seen from our observation point, so we can say we saw the statues, just not up close and personal!

Finally, we arrive in French Polynesia! Papeete is our first port, which we have been to numerous times, but we got off to shop from the local craftsmen on shore. I bought a beautiful hand assembled shell necklace that I can wear with my Aloha dresses in Hawaii. They drive a hard bargain here but I was able to get them down from $60 US dollars to $40, probably still overpriced but I helped the local economy!?!

Next was Bora Bora, a beautiful island we also have visited several times previously. The day dawned rainy and cloudy, so special lunch onboard became our choice followed by a bridge game. That is the wonderful thing about repeating ports you have been to previously; you don’t feel pressured to get off when you have such a wonderful alternative like Crystal Serenity!

Another day at sea, and we are looking forward to Rarotonga, a tiny island where the Bounty mutineers burned their ship and hid out to avoid the reach of British authorities. The ship had been showing the movie, Mutiny on the Bounty, for several days to get us ready for this seldom visited island. However, it was not to be!   The Captain deemed the water around the island landing spot way too rough to safely launch the tenders, so the ship moved on.

I must say the crew did a marvelous job, of adding lectures, along with a wide variety of activities to fill what was to have been a port day!

Next we arrived in beautiful Auckland, New Zealand, docking in the heart of the city!  Having done all of the normal tourist attractions, previously, we decide to turn this into a culinary adventure off the ship.

Our first day in Auckland, we had lunch at a wonderful upscale harbor side restaurant named Euro consisting of New Zealand wine, fresh fish and chips, crab and prawn cocktails, and fresh grilled snapper along with good company and a great view made lunch a treat!

For dinner, we headed to one of the top ten restaurants in Auckland, The Soul Bar. Reservations are required and normally must be made two weeks or more in advance. The concierge on the ship made ours. They have inside dining and outside overlooking the harbor on their flower covered verandah. Sitting outside is first come, first serve among people holding reservations for dinner.

We arrived at approximately 7:15 p.m. and there were no tables outside, so they sat us in the very crowded and loud interior. It seems, New Zealanders, who are some of the nicest, politest and helpful population on earth are also the loudest speaking. In fact it seemed everyone was yelling to be heard over the crowd. We told the hostess that we were very uncomfortable where we were sitting and would need to leave unless we could move. Magically, a table that had eaten early outside cleared and moved to a table for four overlooking the harbor on the verandah.

The food and wine lived up to and even surpassed the reviews. John had fresh oysters, and proclaimed them the best he has ever tasted. Mike had a giant prawn cocktail, also delicious. Pinky and I split an appetizer of bottleneck clams and linguini. Not only was it huge in size, but the best noodles and sauce we had ever tasted. Each of us, mistakenly order John Dory fish, delicacy found in very few places in the world, for dinner. It was marvelous, but such a large portion we could have easily split two orders among the four of us, and still not finished all!

The next day, we opted for lunch on the ship, but went to another harbor side restaurant, Mecca, for dinner. Its specialty was Greek food, which was good but paled in comparison to the other restaurants!

Finally, the third day, we ate lunch out on the verandah overlooking the harbor at The Harbor Bar and grill. Another, wonderful meal composed of a giant raw seafood plate, fish and chips along with more New Zealand wine for the girls and local draft beer for the boys.

All too soon, it was time to sail away from this beautiful port at 5:30 p.m. However, the culinary experience was memorable and all within walking distances from the ship. We definitely will visit all of these restaurants, except perhaps for Mecca on our next visit to Auckland!

Today we are in Tauranga, New Zealand, where there is a special World Cruise Event at Hobbiton, the original movie set for The Lord of Rings movies, this evening for those passengers sailing on the full 108 days. Stay tuned for this!

Excitement is building as 501 of the 600 plus full world cruisers have signed up for one of several Full World Cruiser Special Events being held tonight at Hobbiton in Tauranga, New Zealand. Hobbiton?  What’s a Hobbit?  What is Hobbiton?

Those were the exact questions we asked only to find out that Hobbiton is the movie set where several of The Lord of the Rings Trilogies were filmed. Having never seen the movies nor having read the books, we were clueless, along with many other world cruisers. However, we were assured that Crystal goes all out for these full world cruise events and that we would not be disappointed. Still we wondered if it would be worth the hour and fifteen minute bus ride to see movie props from this Hobbiton?

At 4:45 pm we boarded the bus, still unsure of our decision to attend, but full of hope for fun evening. The ride took us up into the clouds through the mountains with beautiful vistas, sheep farms, cattle farms and green pastures as far as the eye could see. The weather was misting rain and appeared very cool. However, once we descended to the other side, it was sunny and perfect sweater weather!

Upon departing the bus, we were greeted by costumed “Hobbitons” carrying trays of red and white wine.

The setting was magical, like stepping back into another time and era in the mythical village of Hobbiton, with its Green Tavern (a real, authentic building, not just a movie prop), lake, mill with giant water wheel and, of course, Hobbit houses built into the ground. There was even a Marketplace across the bridge by the Mill with costumed vendors grilling lamb chops, fresh fish, cheese, bread, shrimp and every type of food indigenous to New Zealand. Of course, this was all free as the entire venue was closed to the public that evening for this special Crystal World Cruise event!

Making our way back across the bridge, more food and wine awaited as did musicians and the fire eater! Not being shy, I chose to get into the act helping the fire eater by holding his torch!

With wine in hand we ventured farther into the village only to encounter a special beautiful giant and a wooden bridge over the lake upon which the wizard and his helpers were slowly making their way across the lake on a barge propelled by a hand held rope; all the while loudly welcoming Crystal Cruise Lines’ special guests.

Slowly, we walked and marveled at a scene of what seemed like authentic beauty, as we crossed that mythical path in our minds between reality and fantasy!

The Green Tavern, complete with two fireplaces with blazing infernos of logs, two bars with mugs of beer and more wine, musicians, and tables filled with cheese, homemade breads, beef pot pies, hard boiled eggs (ok that’s weird), fish cakes, and more awaited inside. We chose a few items including one of the most different and deliciously sweet beef pot pies you have ever tasted and headed to a long table outside where roving waitresses in full costume strolled by offering delicacy after delicacy as we watched the village come alive in lanterns as the sun starting sliding away in the sky.

Dessert was served next, along with coffee, beer and, of course, being New Zealand more wine by the roving Hobbiton ladies on trays filled with delicacies. The sky over the lake lit up with holograms of the Crystal logo, Julie Andrews, godmother of the Serenity, and scenes from the movie! This was followed by a spectacular laser light show only to be out done by a brilliant fireworks display over the lake!

Sadly all too soon, it was time to say goodbye to the fairytale land and fantasy evening we had been immersed in and reboard the buses back to the ship, where we were told a huge sandwich buffet awaited on our return at approximately 11 p.m. Were they kidding? We were all stuffed, happy and content after one of the most magical evening we had ever spent! 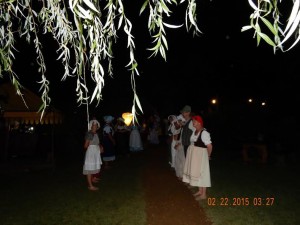 We wished our hosts a fond farewell as we walked down the goodbye line of Hobbiton villagers! Crystal Cruises, as usual, under promised and greatly over delivered one of the best evenings ever! Our fellow full world cruise guests were all still raving the following day about an experience of a lifetime. Thanks Crystal for being Crystal!!! Nobody does it better!!!